The landscape for frontend frameworks has been changing a lot over the last few years, so it is understandable to be “scared” of going for the “wrong” one. This article shows the recent development of frontend frameworks well. Once you start diving deeper into a framework, you will begin to love it. It makes your code easily scalable, more readable, and possibly a thousand times more efficient (just our modest estimation).

If you need more convincing, the recent 2020 StackOverflow Developer Survey should be reason enough to get excited about learning React. Still unsure? Check out this article.

Applications built with React are made with (reusable) components. Components are your “building blocks” in React. To gain confidence using React, you should learn to divide your application or project into separate components. The following picture gives you an idea of how to do that with a very basic app. 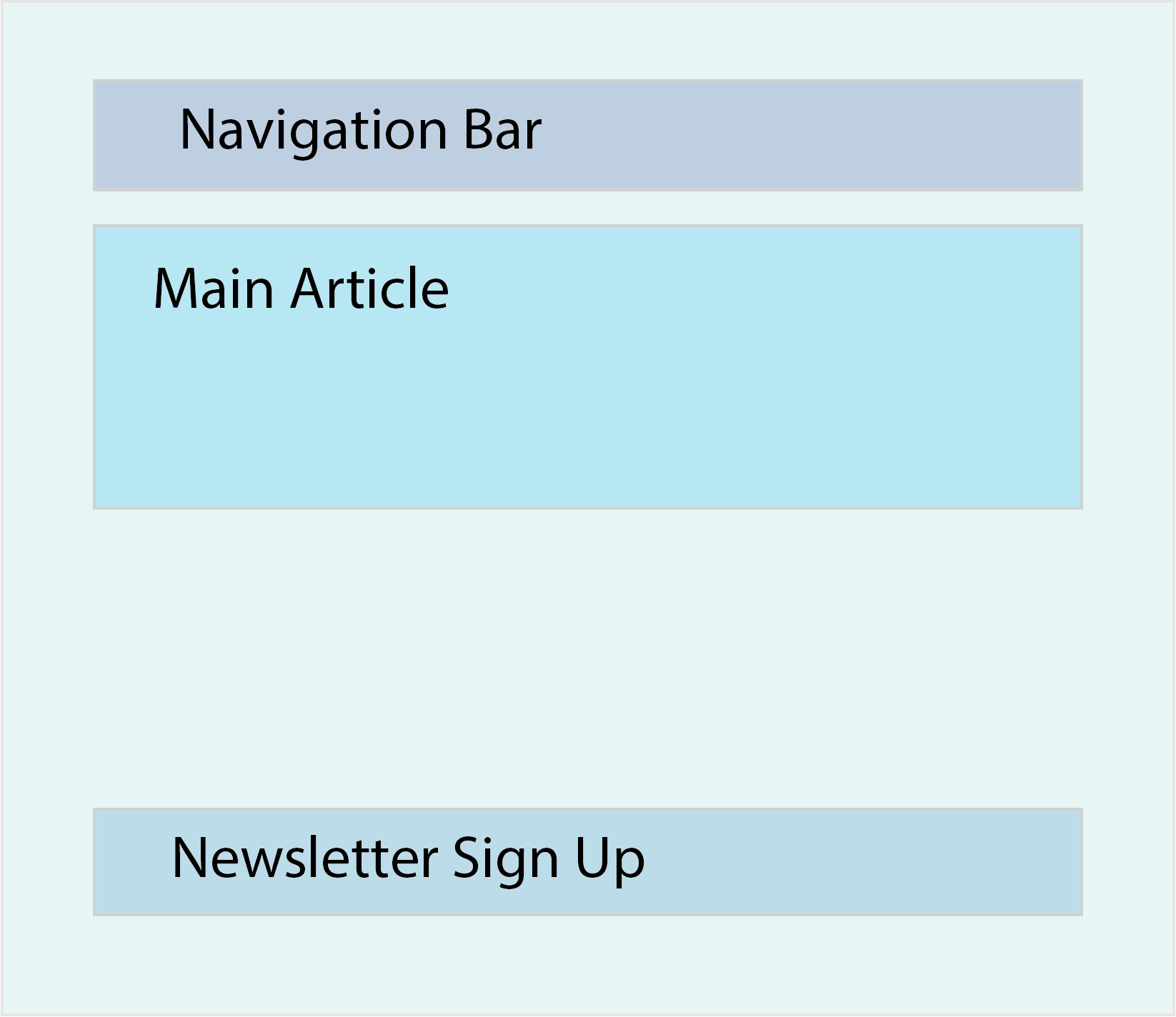 For example, this simple website could be divided into the following sections (components):

In React, each component is defined in an ES6 module. ES6 (ECMA2015) introduced the import statement; you can import code from a module into another module. This allows us to write each component in its own module in a separate file and later import all components to the parent component like so: import ExampleComponent from "./components/ExampleComponent". (In our case that parent would be App.js)

In the beginning, it might be a little bit difficult to figure out the best component structure, especially when state and props come into play. This topic will be discussed in the following sections. For now, don’t worry too much about the component structure, understanding of best practices comes with experience. React components, in general, can and usually do have parent or child components. This system of structuring your applications helps to keep your code structured and makes it easy to keep track of your components’ relationships with each other.

Does the code look foreign? Don’t worry, the structure isn’t as difficult as it may look. Let’s walk through it step by step.

Secondly, we are declaring the class component, which is just a JavaScript class that extends the Component class we imported earlier. One thing to notice is that React components should always be declared with a capital letter at the beginning. This is a naming convention used by most developers and recommended by the React core team at Facebook.

Next is the constructor. A constructor is not obligatory in a class component, but you will most likely encounter one because it becomes important when concepts like inheritance and state are involved. To get used to seeing it, it has been included here. You will usually see developers passing props as an argument to the constructor and also to the super() call, which must be called in any constructor. However, you will not learn about props here. This concept will be discussed further in the next lesson. The idea here is to expose you to the terminology that we will be using in the future.

This syntax may look weird at first, but it is nothing more than a simple comment. In React, you write comments within curly brackets and /* */. There are sections of React components where the comments (denoted by //) we are used to are permissible. For now, we’ll leave that as an exercise for you.

The most unfamiliar code is likely the render() function, which returns something that looks like HTML, but is actually JSX. One of the primary characteristics and features of React is the ability to combine JavaScript and JSX. JSX is an HTML-like syntax that will be transpiled into JavaScript so a browser will be able to process it. One thing you should know about JSX is that you can’t use the HTML protected words, such as class or onchange. Instead of class you write className and instead of onchange you write onChange. In general, all attributes in JSX are written in camelCase. You should be fairly familiar with that naming convention from the naming of variables in JavaScript. The render() function you see is the most used React lifecycle function (more on that in an upcoming section). The only thing you should know for now is that every React class component needs a render function, which returns one JSX element. So whatever you want to return needs to be wrapped in a single parent element.

So far, so good! We have already learned a lot about components in React, and let me tell you, class components are just one way of defining components. In React, another way is to use functional components.

As you can see, there are a couple of differences between functional and class based components.

There are more differences, which we will encounter when discussing props and state.

For further understanding of the difference between functional and class based components, read this article. They discuss concepts like state and lifecycle methods, which we haven’t talked about yet. However, keep them in mind because it will prove useful later on in the course. Rest assured, we will expand on “Which one should I use?” later.

Two of the most important files create-react-app includes for you are index.js and App.js. index.js is the entry point of your application by default. Open up your index.js file and check out this line:

In short, this line of code tells React to render the App component into the DOM, exactly into the element with the id “root”. Every create-react-app project has a root div, which is visible in the index.html file in your public directory. If you decide to name your main application component differently than App.js, make sure to change its name in the index.js as well.

Chat with our friendly Odin community in our Discord chatrooms!